A Designer Who Helps You Design Your Dreams, Not Just Clothes. Stella Carakasi 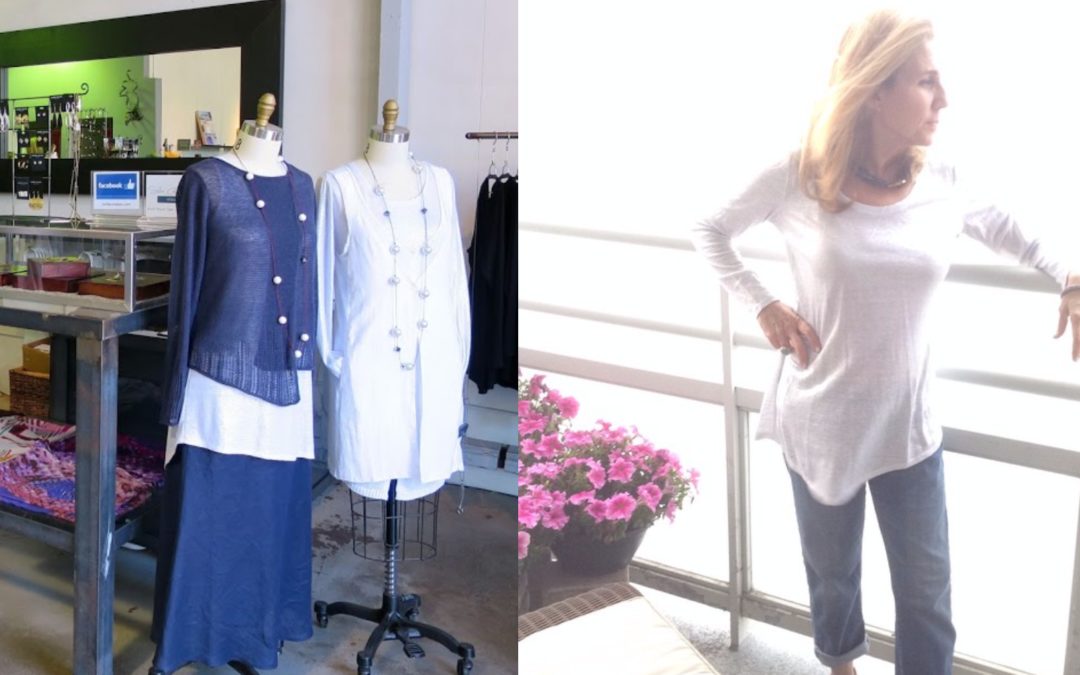 When I was asked by the Staff at Stella Carakasi to take a look at their clothing, I was of course reserved to say anything to indicate that I would promote their designs, in case I didn't like them.   Cautiously, I opened the box that they sent and was almost prepared not to like the clothes because there are so few fashions that are truly for Women Over Fifty.  I tried on several "outfits" and much to my surprise, and delight, I was very pleased. And I am pretty picky.

Stella Carakasi is headquartered in Berkely, Ca.  No coincidence that my son also was in school there this past year!!  Somehow, I got to talking with the lovely people at Stella's and was so honored and excited when they asked me to drop by their facility to see their lines for the Summer and Fall. So, on the weekend we were scheduled to move my son out of his apartment for the summer, I scheduled a time to make it over to Stella Carakasi's. Wow, what an impressive store and the clothes, fantastic for Any Woman Any Age.

On the introductory page of this blog, there is a description of my journey and how it involves energetic, or spiritual, work with the Native American Shamans of Peru.  You are probably wondering what this has to do with Stella.  Well, through my training, I have learned how to sense when something or someone has a depth that may not be fully recognized by others.  It's hard to describe it other than what I just said.  So, when I arrived, I was expecting to see clothes, and the clothes were indeed fabulous. (I am not just saying this). However, when I met the actual Stella, I was swept off my feet by this incredible woman's vision. This petite woman who is about to turn Fifty herself, is so much bigger than her very small frame.  In fact, this woman is spiritually aligned with the designs that she creates; I have never met anyone like her. Stella designs with respect for every woman's shape in mind.  Not just women Over Fifty, but women who may have bigger hips, or a bigger waist, or bigger breasts, or bigger or smaller whatever.  Her goal is not to appeal to the same audience as most designers, but rather to a woman's sensuality and sense of beauty. Most importantly, her vision is not just that women will look beautiful, but that if women feel beautiful, they will show up in the world more empowered and more confident. Her goal is to help all women feel beautiful in her clothes.

Stella started out 22 years ago as a partner with two brothers to form the company that now bears her name. Stella built a great clothing line and had a great team behind her. She has been on her own for many years,  but recently partnered up with a new creative force, Vivian.  Vivian, also a pharmaceutical consultant and former dancer, is the perfect compliment to Stella.  Vivian has brought great new ideas and creativity to the brand Stella Carakasi. Vivian, a powerful partner of Stella's and the brand Stella Carakasi. Notice her dancer's pose! Of course she is wearing all Stella Carakasi clothing.

After my chat with Stella and Vivian in the back, we went out to the storefront where women were trying on clothes and making purchases. I was fortunate enough to meet several of their regular clients, and much to my surprise, a good portion of them were Over Fifty. There is something in the air in Berkeley, or maybe it is because it is a world class educational mecca, but the Over Fifty women I spoke with were so engaged and involved in the world. These women were contributors to society and you could just tell that Stella's styles were fulfilling the needs of these special ladies. The welcoming store where I found several Over Fifty women shopping away.

In June, I needed to bring my son back to Berkeley for his summer internship, and so I contacted Vivian and told her that I could stop by again, I had so much fun the first time.  Unbeknownst to me, they sent out an email to their clients informing them that I would be there for a meet and greet."

Had I known, I would have dressed better.  We bloggers have images to keep! I was so honored when women showed up and told me that they had found my website from sources other than Stella. What a great feeling to know that the message of Fashion Over Fifty is reaching beyond my own sphere. Elena, Me, Linda and Win.

You could sit and talk to these women all day! More women came later on, and I think we all had such a nice time sharing, not just our passion for Stella, but also our stories.  Everyone has a story, and there isn't enough space here to write those. It isn't a party without trying on clothes. Here Susan is asking our opinion of what she just tried on.  Great shoes!!

Finally there is the group of employees who are all really kind and generous of their time. It really felt like I was part of a family and it was such a great feeling. They haven't seen the last of me All in all, it was such a great day. Great not only to meet the special women who came out to meet me, but special because there was a common thread between all of us.  We are all women who are trying to be beautiful inside and out, and Stella Carakasi helped all of us feel that way. Thanks so much to everyone. This top was a big hit on my Facebook page Fashion Over Fifty.  It is the Metallic Look So Good top.