A Dramatic Before and After, along with a History of Curly Hair in America 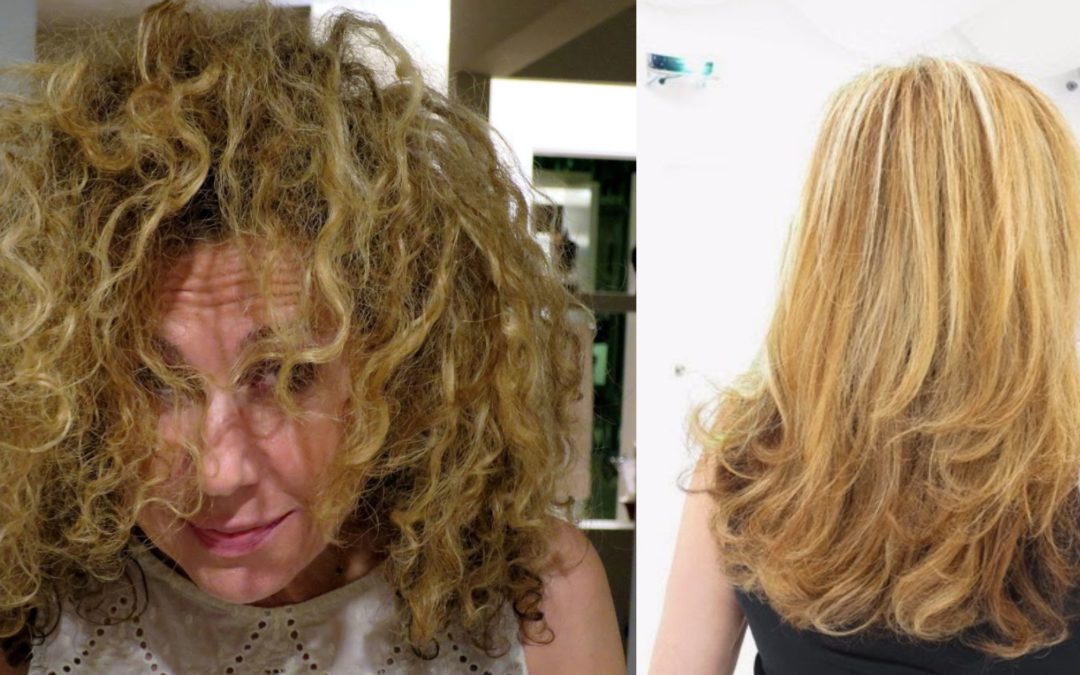 First off, it's a warm summer day and occasionally I let my hair go "au naturel", which for me is a curly mess.  People comment how lucky I am to have such curly wild hair. HAH!  If you grew up in or around the '60's, which I assume most of you did, you would know that curly hair was a "no-no". Cheryl Tiegs, Twiggy, Jean Shrimpton, you name her, every female icon had straight, and mostly blonde, hair. I probably wasn't the only one who went to great lengths to straighten their hair during those years but even today, I look around, and my hair is pretty out of control compared to the average population. My mom was adopted, so I don't know where it comes from. Anyway, those with curly hair, and even wavy hair, did everything, including: ironing it, wrapping it, gobbing DEP on it, pinning it down with pin curls, or actually chemically straightening it. Do you remember when you first started seeing Beauty Supply Stores independent from Pharmacies in the early '80's? Excitedly, I went in to one thinking that there may be something new to reduce the curls or the frizz. Nope, they looked at me like I was crazy.  That was not that long ago and Not ONE product for curly or frizzy hair.

It was the African American women who really knew how to really straighten hair, so that's where I went. I went to Alice.  What did she use? Sodium hydroxide, otherwise known as LYE.  For those that don't know Chemistry; solutions can be acid or base The more acidic, the more it burns. However, the more base it is, the more it also burns. Because lye is so caustic, it left burns on my scalp. How many stupid things did we all do for beauty?  Well, this is definitely one of the stupider things that I tolerated for the sake of beauty.  The good news, my hair would come out stick straight, and it would last until the next time I straightened it. Usually, every 6 months was good.

When I moved to Los Angeles, I found a great guy who knew exactly what to do. What happened?He ran off with an older woman who funded his Music Career.  I begged him to just do my hair every six months, but nope, he had a good thing going.  So, then I tried a woman on Melrose Avenue. After putting on the LYE, she put me under the hair dryer, which no one had ever done before.  Two days later, most of my hair broke off.  It took almost a year to get it to look halfway decent.

Oh the Trial and Tribulations of Curly Hair.  I could write a book.  If every one shared their stories we could write Volumes.  In fact, if you would like to share your story about your curly hair episodes, I will post them either here or on Facebook. Or please comment at the end of the article. I am not sure what year the tide began to turn, but slowly curly hair became the thing to have!
Even then, I had been so brain-washed by society, that I still wore it straight. At first, the curly hair products were only in salons and beauty supply stores. We curly-haired people knew that Pantene and other drugstore brands were missing the boat. Once a product had a word on it to do with anti-frizz, I bought it.  I became an anti-curl/frizz product junky.  Sometimes I would mix 3 or 4 together at the same time. If I liked how it looked I was out of luck because I would never be able to duplicate it. To this day, I must have at least 15 anti-frizz/curl products under my sink, that I don't use.

Madonna was a great influence on many of us women in the '80's.  Not that women condoned her behavior, or her irreverence, but she empowered women to be more daring.  It was around that time that I decided I would be daring and let me hair go curly. I was in Law School at the time. It felt so BOLD of me to be able to just wash and wear it.  However, whenever anyone complemented me on how lucky I was to have curly hair, I was almost angry. I wanted to tell them how I had struggled with it for at least 20 years by: planning on when I could go swimming; planning on what to do if I was in a humid climate; sleeping on Campbell soup cans; feeling self-conscious if it rained unexpectedly and I wasn't prepared, and how it basically ruled my life.

Today, 30 some years later, EVERYBODY who doesn't have curly hair, loves curly hair. The irony is that it is really HOT to wear it curly. It is literally like wearing a fur hat. Wearing a fur hat on a summer's day is no fun. And as all of us Over Fifties know, being HOT is not something we enjoy. So, just when curly hair is in style, I have done everything NOT to be hot. When it's really hot, I end up putting it up, and then one can't see the curls, just the FRIZZ, ugh!

I suppose there are a lot worse things to have struggled with in your life than curly hair;
believe me, I am blessed to be healthy! All of us are, no matter what struggles we might have. But, I guess in this lifetime, my hair will always be the boss.  No one is happier to see all of the DRY BARS springing up all over the country.  Now I can actually go away and know that I can get my hair done by someone other than my own blow stylist. (In the '70's, hairdressers had no clue how to blow it dry.  The all used that Vidal Sassoon rubber brush if you remember).

There is, however, one great advantage to having curly hair as we get older. Men notice me much more when my hair is wild and curly. I must look a lot younger, because it's the only time any male pays attention to me anymore.  My theory is that men must think: "Wild hair, Wild woman". Not so, but considering all of the headaches it's caused, it's fun to pretend!!!

Now you get to see the difference for yourself!!