Bloomingdale’s Offers Fashion Over Fifty and Mark Carter the Opportunity to Produce a Fashion Show with Only Women Over Fifty!! 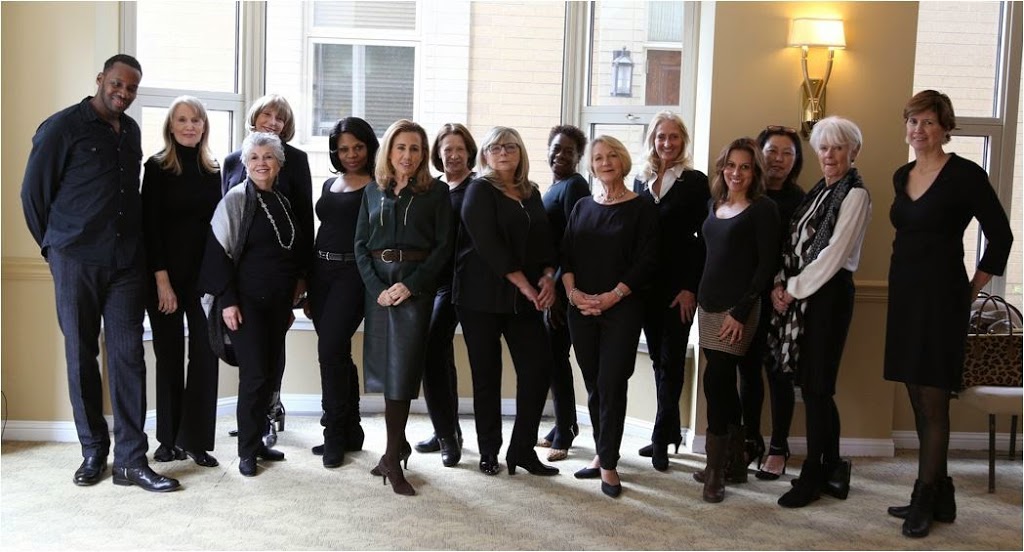 Our first fifteen women to walk down the runway at Bloomingdales.  Many women committed, but due to unforeseen circumstances, had to drop out at the last minute. Scrambling. Putting a fashion show together is all about scrambling.  Schedules change, security alarms go off in the store the day of the rehearsal, flights are delayed, you name it.  Finally, we get thirteen of the models together and the other two will come later. After all the scrambling, here we are. What a wonderful and diverse group of ladies. Ranging in ages from fifty-two to NINETY!! Sizes ranged from Size 2 to Size 16. From all walks of life, all races, and many socio-economic groups. But, they all have one thing in common.  They are all women Over Fifty and each woman had her own reason for wanting to push themselves to do this.  When life gets too comfortable, that's the time to challenge yourself. All of these wonderful women did just that. The time and effort they put in paid off for them individually and for the bigger cause, Women Over Fifty. Our runway coach, Mark Carter, has produced his own fashion shows for years. Never, however, with only models Over Fifty. For Mark, not a problem. One of the most professional coaches ever, along with being kind, non-judgmental, and encouraging.  All of the women felt so comfortable with his direction and style of teaching, it was great. Nonetheless, still hard work.  Head up, shoulders back, stomachs in, quarter turn, quarter turn, and quarter turn, were only some of the things each woman had to remember while nervously modeling down the runway. This is Laural. Mark is walking with Laural, as he will do with each model, to help them feel confident, and to help them with their techniques. Laural is enjoying this, and  enjoyed so much of it. Last year Laurel had decided that she was going to work on herself and her self-confidence. It's hard to think of a better way to that than this. At the end, Laural was so happy that she had done this and that it had come at the perfect time. Laural was touched by the camaraderie among the women. Everyone really encouraged each other whether it be in modeling, or trying on clothes, or just being supportive. "It felt like a sisterhood of women encouraging other women." Now, isn't that the way it should be?   We think so. Laural has accomplished so much in her life. She has 2 Master's Degrees and she in now working on her PhD. She was also an early childhood educator for many years but has retired. However, Laural has no plans on slowing down. She volunteers, and is working on being the best sister she can be. Now, she can add this to her list of things she has accomplished.  Thanks so much Laural.  Your presence was a gift to all of us.

This is Blanche.  Blanche is 61. Blanche Romey sells Real Estate in the city of Chicago. At almost six feet tall, she played basketball in college. Her athleticism came in handy for this job.  She was right at ease and we all wished we were as tall as Blanche.  Just being tall made Blanche look like a model!!  Not fair. Blanche was one of 12 kids. Hardly a "fashionista", as she wore mostly "hand-me-downs". She believes that we are each each other's landscapes, meaning that when you look at someone and they look good, it makes you feel good too. It makes everybody feel better. Not everyone is perfect or even beautiful, but as long as you can be the most beautiful person that you can be, there is a great sense of self-contentment. Blanche was a beautiful landscape at the fashion show. As the tallest and probably most athletic, Blanche made it look so easy.  Thanks so much to Blanche for her participation. This is Eileen. Eileen was a Public School teacher for many years.  She has also been a business owner, an event planner, and now she even does Improv around Chicago, along with singing at the Old Town School of Music. What doesn't she do? Eileen recently had an epiphany when a young girl apologized for accidentally running in to her. The young girl said that she hadn't seen Eileen, and suddenly Eileen realized that she didn't see herself either. This modeling opportunity helped Eileen on her new found mission to get a picture of who she really is. Watching her walk down the runway, you could just see that she is beginning to see herself in a beautiful and confident light. Eileen seemed to blossom like a flower during the week. On the final day at the fashion show, she was like a different person. All of her hard work paid off, and it was great having her aboard. Thank you so much. This is Cindi. Cindi came all the way from California. Her youngest daughter recently left for college and she is going through the empty nest syndrome. I talked her in to coming because I thought it would be the best thing for her to get back on her feet. She actually had a really good time, but unfortunately, couldn't stay for the fashion show. We were all so sorry to see her go!! This is Carol. Hard to believe but Carol is 71! Carol worked for the Lyric Opera of Chicago for many years and knows a lot about a lot of things. She was also very kind to arrange for us to use the community room in her building for us to practice. As the very kind and generous person that she is, she had coffee and refreshments ready for us each morning when we arrived. The ladies were all so grateful, especially for the coffee. Carol's building was also right in the heart of the city, near all the action.  It was especially fun for the out of town women to be front and center in the hub bub of Chicago. Carol loved this experience so much, she wants to be in other Fashion Over Fifty fashion shows. I think she has a new career at 71. She could and should definitely be a runway model. Carol was the most eager and caring person always ready to do a favor for anyone. We couldn't have done this without her.  Well, we could have, but it wouldn't have been nearly as nice. Thanks Carol, for all you did and for being who you are. This is Maureen Mohling. Straight from Central casting with her gorgeous silver/white hair. She even showed up looking like a model the very first day.  Even though her beuaty may have been intimidating, she was the nicest and most down to earth woman.  She too sells Real Estate in the city of Chicago, with Blanche, and they can be my Agents any day of the week. If she is as professional in real estate as she was in modeling, you can't go wrong. She was a school teacher first, but has been in Real Estate for 35 years.  She has 3 sons and 7 grandchildren. She also loved how all of the women were so supportive of each other. The camaraderie of the group was great. Maureen also learned that your posture and the way you carry yourself say so much about you. By standing tall, with your head up, and in the right position, it helps you feel so much more confident about yourself. Maureen's confidence was contagious. Just being around her, helped the other women feel more confident as well. Thanks so much Maureen. This beautiful woman has children in their late 30's.  You would never know it. She too has done a million things in her lifetime. Her latest career has her as the Senior Director for Community Development at the Midwest Palliative and Hospice Care Center. Anne was the perfect role model for every woman Over Fifty. She believes that when life gets too comfortable, it's best to push the envelope. Anne developed a new comfort in her own skin after being in the show. Anne was a great participant and always so encouraging to the other women.  Thanks so much Anne for your contribution. Though just over five feet, this woman, Wilma, is full of more life than many people you will meet in your lifetime.  At 77, she has no intention of slowing down either.  In fact, she had one of the hardest times making it to the practices because of her busy schedule. Whether playing cards, Mah Jong, or traveling, Wilma is always on the go. With 4 children and 8 grandchildren, she is also very involved with her family. As the matriarch of the family, she is a great role model for all the females in how to live your life to the fullest, no matter what age. We don't think there is one shy bone in Wilma's body. She owned the runway and had the best time while doing it. She certainly knows how to have fun, and after all, isn't that what life should be about? Thanks so much Wilma. So, these are the first eight ladies out of sixteen, Cindi left early, so there were fifteen in the show. Two more ladies came the following day all the way from North Carolina.  Stay tuned, and you will meet the next eight models, also dynamic and beautiful women who made this fashion show as amazing as it was.