Do you think Baby Boomer Women are still judging other Boomer women based on our old patterns? 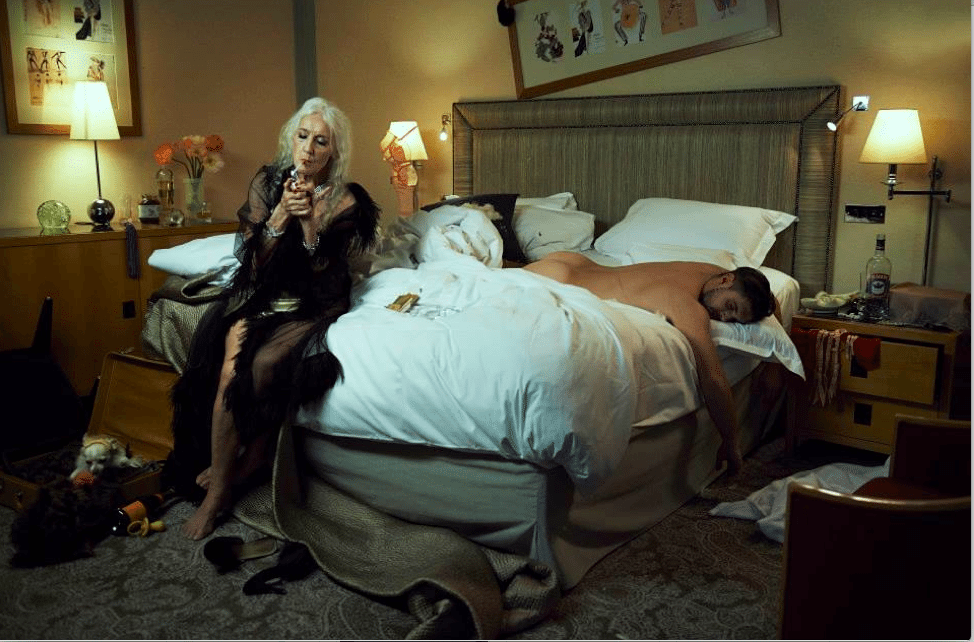 Do You Think It's Possible That Baby Boomer's (YOU) Are in Denial About Getting Older? Are we all Ageists without knowing it? What do you think when you see an older woman in a sexual photo like the one below? There are over 100 million Americans over the age of 50 in the United States. The Baby Boomers will soon control more than 70 percent of all disposable income. Over two-thirds of all the cars bought in the United States will be purchased by Baby Boomers. Over half of all computers will be purchased by Baby Boomers. Baby Boomers spend over $7 million a year on online shopping.  Source: AARP These statistics would have any advertising agency frothing at the bit to have even the smallest portion of this target market, the largest in the western world.  Yet advertisers have ignored the fact that as Boomers, we have spent over $400 billion dollars more than any other generation. They continue to ignore our presence and our influence in the market place.  In fact, pick up almost any magazine (other than a Readers' Digest and the like) and the only time you will see an adult over fifty is for a medical condition such as arthritis, or incontinence, or perhaps  the happy recipient of a Viagra user. Source: Entrepreneur.com Boomers are definitely excluded from media which this article will help to explain; however, the fact remains that we are being discriminated against.  In this country, when any group is treated differently than another or  is excluded, everybody is up at arms. The best example is when one race is treated unfairly. We call that racism.  In this instance it is referred to as ageism.

The term "ageism" was coined 45 years ago by Dr. Robert Butler, a physician, gerontologist, psychiatrist, and director of the National Institute on Aging. Butler, who grew up with his grandparents, was sensitive to the dismissive attitude of his medical colleagues toward the elderly and later became their champions. In characterizing the unequal treatment of people based upon their chronological age, he referred to it as ageism.  Source: Nelson, T. (Ed.) (2002). Ageism: Stereotyping and Prejudice against Older People. MIT Press. ISBN 978-0-262-64057-2. Since that time, the subject has been explored by academicians, policy makers and researchers. Just this month,  The 24th ISA World Congress of  Sociology convened where a primary topic of the Conference was "Age Inequalities, Ageism and Age Discrimination: Still on the Rise?" However, you don't have to be a sociologist, a doctor, or a scholar to know that, at least, in the United States, ageism not only exists, but that it is prevalent. As all of us over fifty know, we have become outnumbered and outdated by advances  in computers, social media, and exponential advancements in technology.  Ageism exists in all facets of American life, but can actually be seen most visibly in the world of fashion.

Last year, at the Royal College of Art, in London, a seminar devoted to fashion and getting older took place. Professor Julia Twigg from the University of Kent, in London, was a presenter. Professor Twigg has published a book,  Fashion and Age. Ms. Twigg's  research is the first known study to explore the relationship between clothing and age.  In her book she examines  sociological and historical data, along with fashion theory and cultural gerontology. The findings revealed, not surprisingly, that society has historically dictated the norms of older women and dress, such as : higher necklines, longer skirts, looser clothing, darker colors, and most of all, anything that would attempt to attract sexual attention. Concomitant with these "rules" comes a sense of isolation, or the "cultural exile of feminity."  (Any isolation of the elderly is a serious sociological problem that the U.S. government is finally beginning to address.) Ms. Twigg concludes that ageism clearly exists at a visceral level in response to merely the appearance of an older person. Fashion and Age p.8. Hence, explaining the dearth of women over 50 in any advertisements. The word visceral conotes a negative emotion that is almost revolting or disgusting ; a pretty condemning prognosis for women who may have 40 to 50 more years to live. On a more positive note, research also shows that the rules of fashion and "social ordering" have lessened. Social ordering is being called by academia as the "Reconstitution of Ageing Thesis".  "Across both academic and popular accounts there is a pervasive belief that the nature of old age has undergone significant changes in the past 30 years due to a number of factors too lengthy for this article.  Sociologically, though,  stages of life have become more fluid and less clearly defined. This, of course is promising and helps explain why we are beginning to see a few older women in fashion, such as Lauren Hutton. Brands and the media reflect both sides of this research.  The British Publication, High 50, spoke to the ad agency for Guinness Beer. The message Guinness wanted to convey was that their consumer has "integrity, character, and the ability to make the most of life". They attest that they never considered age as a factor, but only "attitude". The result is an ad campaign with snappily dressed older men known as the "Sapeurs". If you have seen the Dos Equis beer ads, you will recall the distinctively handsome older man (“the most interesting man in the world”) with white hair and white beard in the ad.  He is becoming a well recognized face that people associated with something positive, which is definitely a step in the right direction. In general, Western Europe has been quicker to embrace older people in the media than the U.S. In the mid '90s, Paris and London opened an ad agency, Masters Models, and hired only people over 50 with the awareness that the demographics in the marketplace are changing.  Here is a sample of a group of new "older" models recently hired.  You can see that they are not the glamourous toothpicks that you are used to seeing. The ad agency, Joint London, worked for many years with Marks and Spencer Department Store in London. The co-founder, Lori Meakin, against protest, brought Twiggy in to promote the brand. The campaign was a huge success, resulting in Marks and Spencer subsequently using Helen Mirren, Annie Lennox, and other "older celebrities" who sit amongst younger models. The clever use of Twiggy was very apropos considering that she was an icon of the cultural revolution which took place in the '60s.  Hopefully, she is once again helping to spearhead another cultural revolution by spurring on the cultural acceptance of older women, and men, in the media. As Ms. Twigg's article points out, it has traditionally been taboo for "women over a certain age" to attempt to attract sexual attention." Along with Master's Modeling, another agency aptly named, Mrs. Robinson, has been pushing the status quo of this taboo.  If you go to their websites you will find photos of women who are not only dressed in sexually revealing clothes, but in sexually evocative scenes as well;  such as the one below. As a Baby Boomer yourself, examine your initial reaction to this picture.  It evokes that "visceral" response, doesn't it? Maybe it's because we don't see ourselves as old?  Or maybe it's because we are in denial that we are getting older? Nonetheless, if this photo offends you in any way, perhaps you too are an ageist without even knowing it.  Until we can really embrace who we are as older adults and an ageing population, we will never like ourselves.  If we don't like ourselves, how can we expect the media to like us?  There will be more discussions on this topic and feel free to leave comments. However, in the meantime,  maybe we need to consider the few designers and cosmetics companies who DO hire someone over 60, as trail blazers. Let's call it a small victory until we give ourselves more time to reflect on just exactly who the Ageists are. This article was published in Boomeon.com.