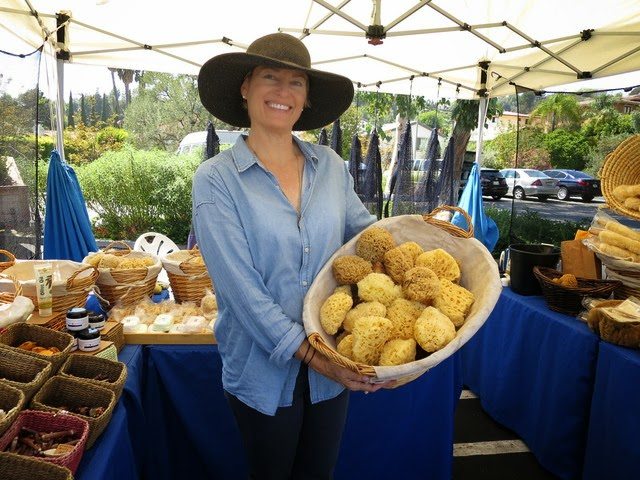 Have you ever compared the Clarsonic Exfoliating Scrubber to using a Washcloth when washing your face?  Well, I have.  The Clarsonic may get off more dead skin, but if I use a washcloth after the Clarisonic, I still get makeup on the cloth. The product maintains that it is a gazillion times more effective than manual washing, but it doesn't say what kind of manual washing. I believe that just using your hands gets almost nothing off of your face! So, if they are comparing it to that, DUH!!

Have you ever tried a sea sponge?  They aren't all that commonly found, but they have definite Pro's to them. First, they are made by Mother Nature herself and are 100% biodegradable. They are able to regenerate after being harvested, so they are a sustainable resource. No chemicals are used and no harmful byproducts occur after harvesting, so using them is very "GREEN". Besides, they also naturally inhibit bacterial growth.

Today, my cousin and I walked by a Farmer's Market and saw this lovely lady standing by the prettiest booth. We started talking to Kerry, an Over Fifty with beautiful skin (coincidence
or not?), who happened to be selling Sea Sponges.  She began to explain the benefits of using a sponge while washing your face and it was intriguing to learn all the benefits of something made by mother nature. If you are a product junky, like me, you have the Clarisonic and have used it for about four months and then began to get impatient.  Two minutes brushing my teeth feels like an eternity; I have learned to multitask, and it's amazing how much you can get done in two minutes while brushing your teeth!!! So, using the Clarisonic for another minute or two, becomes rather a chore.

Anyway, months ago, I wrote an article about a new product that uses electroportation, the Time Master, rather than ultrasound.  Scientific evidence proves that electroportation SO much more effective in cleaning the skin, clearing out pores, and opening pores so that products can more easily be absorbed.  But, the Time Master takes times as well. Eventually, when in a hurry, which is most of the time, I resort to a washcloth, and I love to see the Gobs of makeup come off on to the cloth. I am always amazed by how much I put on, and how much is left by the end of the day.

All that being said, Kerry and the sponges had my cousin and I intrigued. For $8.00, I thought, what could it hurt. Kerry explained about the different textures and their ability to exfoliate, so I picked one on the softer side, since it is new to me. These are just a few of the sponges that Kerry offers, but for a more depth explanation, go their website at http://saintjohnssponge.com/. This explains the various types and helps you determine which one to buy, which you can purchase online.  Hopefully, shipping isn't too much because they obviously don't weigh much.

For the next week, I will now be comparing the washcloth to the sponge. It feels pretty certain that the sponge will be better at exfoliating, but will it holdup to the washcloth test? Will there still be makeup on my face after I am done using it?  Check back in a week and I will let you know.

If you are in Los Angeles at The Glen Center on a Saturday, you can drop by Kerry's booth and see them up close and personal.  They are so pretty and reasonably priced, compared to all of the other products I buy and use for only a short time, it's a no-brainer. Anyway, they are biodegradable, so what's the harm?