Cleavage vs. No-cleavage on Women Over Fifty 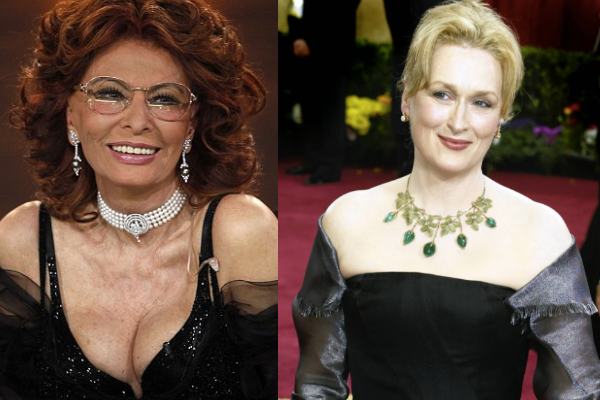 Followers of "FashIon Over Fifty" on Facebook may not know that I am an attorney, (as well as a registered nurse). For the past 4 years that I have been featuring Fashion Over Fifty on Facebook, there have been some bitter battles over photos where women are showing their cleavage. Every few months I am forced to post a notice advising women that rude and insulting comments are not allowed. However, it seems that many women don't understand what this means, or they choose to ignore my requests. The best way I can explain the requirements of being a member of this page, is through legal analysis.

Yesterday, I asked women to explain why they do or do not like to see cleavage on a woman Over Fifty. The responses were well thought out and very intelligent. Fortunately, women stated their positions without the sometimes nasty, bitter and judgmental comments I get when a photo is posted. For that I thank you all very much. I respect all sides of the cleavage issue and would like to put it to rest.

In 1954, the Supreme Court established the Roth test that described obscenity (and pornography) as “material whose "dominant theme taken as a whole appeals to the prurient interest" of the "average person, applying contemporary community standards.” Later in 1964, to more clearly define the Roth test, Supreme Court Judge Stewart stated the he couldn’t explain pornography or obscenity other than "I know it when I see it”. This is a now a legendary quote that has been used many times since 1964.

Why do I bring up these cases? Because this country has struggled valiantly to protect the
First Amendment which entitles us to have Freedom of Speech. Along with that is included the Freedom to dress as one desires. We can all agree that if someone walks around naked, that is probably not protected by the First Amendment. I think we can also agree that if someone is only partially clothed, but engaging in inappropriate sexual acts, that would be deemed as pornographic on Facebook.

My page has never posted anything that would be considered pornographic or obscene. However, from the results of the responses over the past few years, it appears that there are women who disapprove of showing cleavage as if there is a community standard that applies to all women, as if cleavage were pornographic. Some find it distasteful on women at any age, and some on women Over Fifty. The Courts have not decided on what is decent or indecent, hence  there is no test for this. It is a subjective opinion based upon a woman’s background, upbringing, and perhaps even religious beliefs. Fashion Over Fifty respects every woman’s right to uphold their own individual standards of decency.

On the other hand, this country and my page are filled with many many many different opinions and standards of decency. In fashion, designers push the boundaries of our notions of decency and taste beyond what is familiar. Sometimes it is done for shock value, like the designer Rick Owens often does. It may stretch your standard of taste and decency; nonetheless, it is protected speech. Particularly in fashion, also considered an art form, there are many perspectives on what is pretty and what is not. To some, modern art may be just lines or squiggles and to others it may be brilliant. The same holds true for cleavage.

This brings me to the final point, which is that everyone has different standards. You might like some of them, and you may disagree with some of them, but does it reach the test of “I know it when I see it.”? No. Never. Although something may be highly distasteful to you, it is within the bounds of decency and protected speech. As this page is about fashion, your standards of decency may and probably will be challenged. My standards are even challenged, and yet, I will post something if I find it relevant. Why? Because the only place we grow is outside of our comfort zone.The only way to effectuate change and diminish negative opinions about women Over Fifty is to bring it out in the open and confront it.  Therefore, if you feel uncomfortable looking at something; it is not your taste; or if you find it offensive, it is asked that you remain respectful of the other person’s standard of decency. To put it bluntly:rude, judgmental and insulting comments are not acceptable. I am not a Court of law, but this is my page, and this is the law of this page. It is very clear that there are differing opinions based on different backgrounds, but no one has the right to impose or insult those with opinions that are not their own. This goes not only for cleavage, but for everything. That is the foundation of this country and as a lawyer, the foundation upon which I base this page. If your sense of decency is offended, you are kindly asked to scroll past it, ignore it, or unlike the page. One may think their negative comment is being made in a vacuum, but it is not. This page has over 230,000 members, and mean or cruel comments affect everyone. Other women read these comments and some women have "un-liked" the page because of them.

Common decency and respect for each other is a requirement of being a member of this group which I take great pains in making relevant to today. I am highly protective of my creative content and much thought goes in to helping all of us understand each other and have tolerance for one another. If you disagree with my content, my policies, or even me, I respectfully request that you remove yourself from being a member. Thank you, Wendy Packer J.D.