The documentary, “Gray is the New Blonde” Inspires Women to Find Freedom in Being Themselves 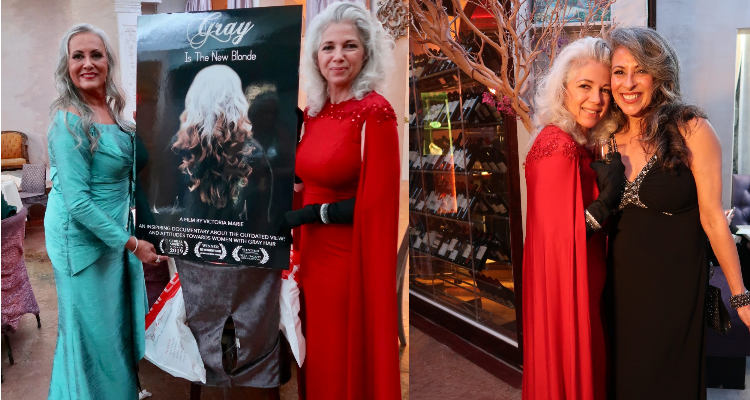 Going gray isn't for everyone, but for those who are thinking about it; they need to go and see the documentary "Gray is the New Blonde"; it will inspire anyone to embrace the freedom to take the risk to be their natural self, no matter what anybody thinks.. In January, the world premier of "Gray is the New Blonde" occurred  in Pasadena, Ca. with the red carpet and all.  The creator/director Victoria Marie does a fabulous job  interviewing many women  who traveled to Los Angeles just to be interviewed for this film. These women, and more, came to the "World Premier" from all over the country. Many had never met before this night. 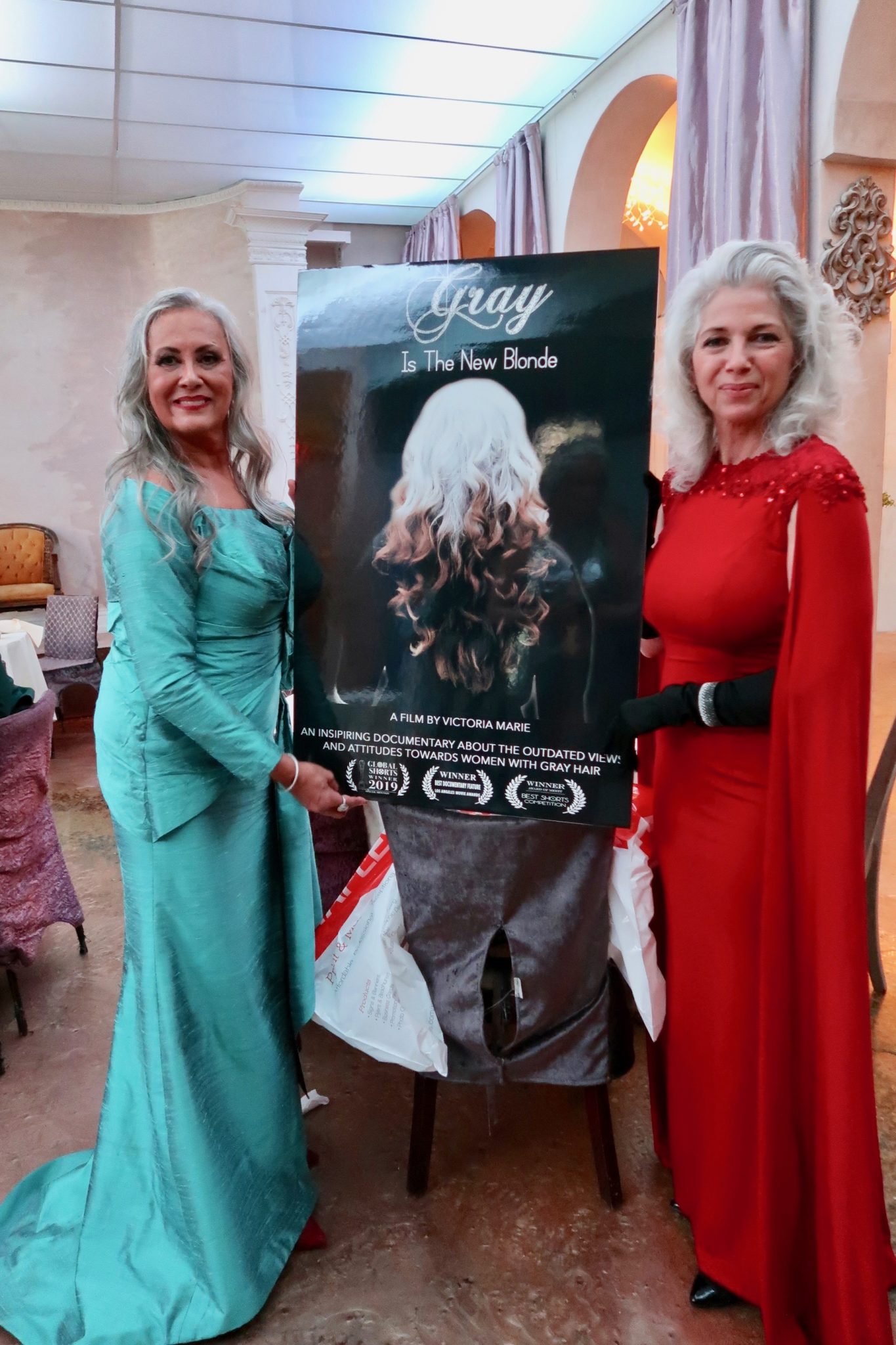 Creator/Director/Producer Victoria Marie is on the right in the stunning red dress. My friend and Fashion Over Fifty model on the left is Irene Bosma Smallwood. Irene was the Brand Ambassador for the Film.

The film was produced, directed, and almost everything else, by Victoria Marie along with her significant other, Dave Nelson. It took them over 5 years to get this picture made with a budget of $0. So, many kudos go out to both of them for their persistence, and professionalism.The film has already won 3 Awards and I won't be surprised if it wins even more. 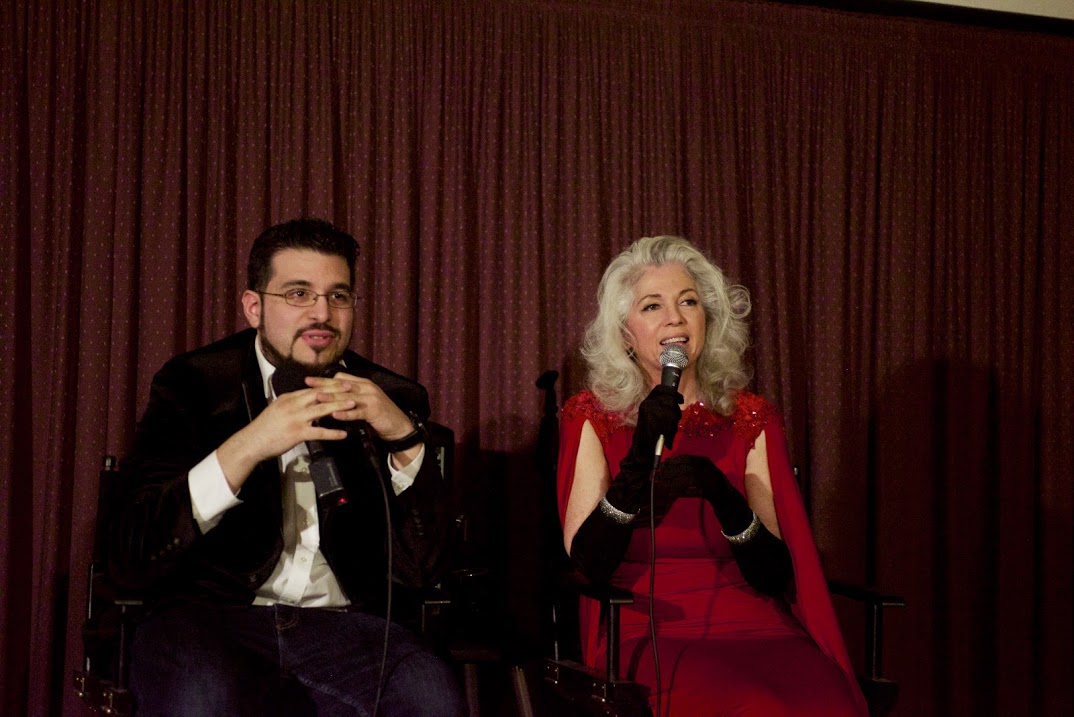 To the left is photographer and assistant everything to Victoria Marie, David Nelson. To the right is Victoria Marie answering audience questions following the film.

The documentary shares touching stories of each woman's journey to "GRAY" .  A first step in the process is obviously  deciding to go gray. This may seem like an easy decision but  today there still remain stigmas associated with  "gray". In general, society, including friends and husbands, associate gray hair with being old, or dowdy, or giving up on oneself. Many women were discouraged from doing it once they had decided. So going gray today is still a very brave move.

The excitement among the women was palpable. No one really knows how much rumination and bravery it takes to "ditch the dye except these ladies. These women were here to tell their stories and let "society" know that just because the dye is ditched, they are still as sensual, sexual, sexy, and vibrant, as they were before they still dyed their hair. Most of these women are probably even sexier. .Looking at the women on the red carpet, I can tell you these women do NOT look old or outdated in any way. 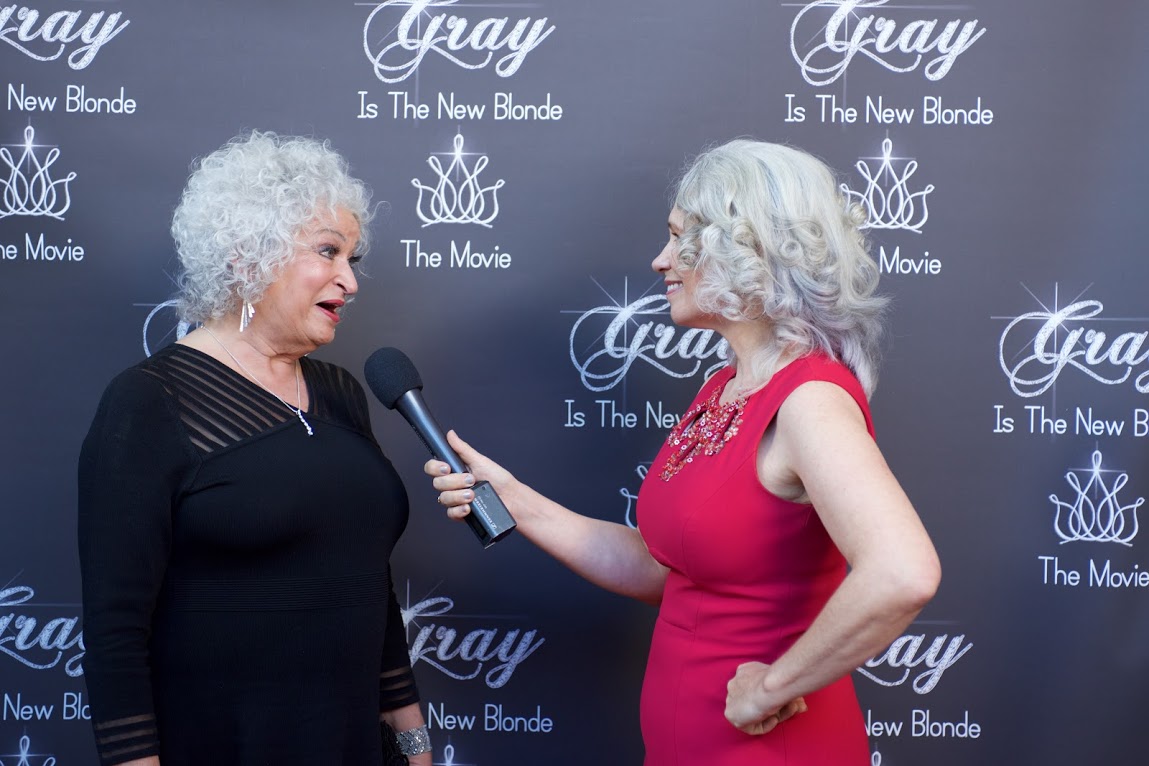 This is Gay being interviewed on the red carpet. Gay is one of the women interviewed in the film "Gray is the New Blonde

In fact, the gray, white, or silver hair brightened up each woman's entire look. These women were like shining stars. Which brings back the issue of bravery in making the decision to ditch the dye. People are going to notice the gray hair, and everyone is going to have an opinion. Don't they always? Going gray is not for the faint of heart for sure!! 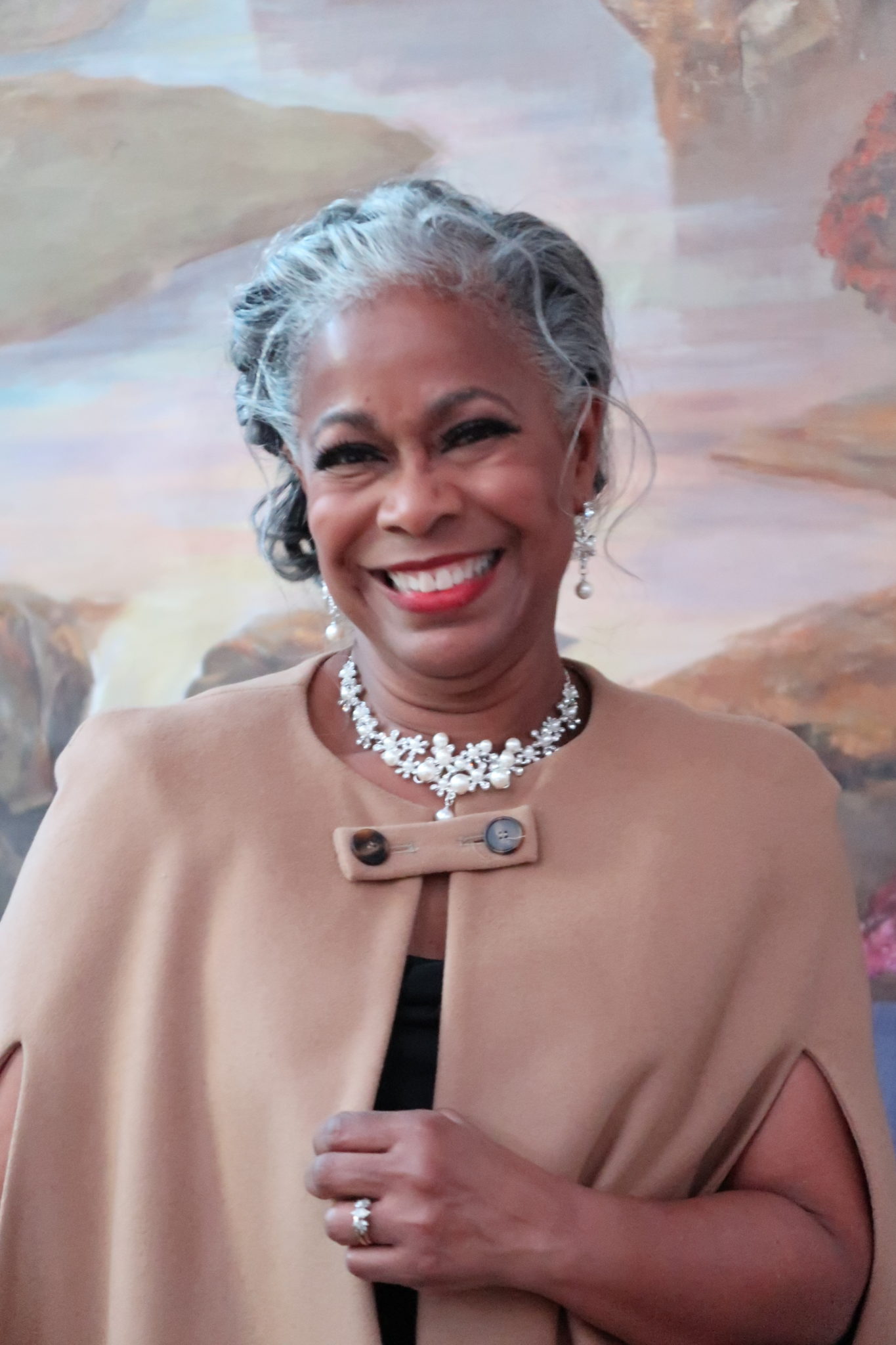 This is another gorgeous woman who has embraced her gray. She is simply stunning.

Once deciding to go gray many women received negative comments from their husbands, family, and of course, people they didn't even know. On the other hand, once women  let their hair go entirely gray, they received so many complements, people were even stopping them on the street. 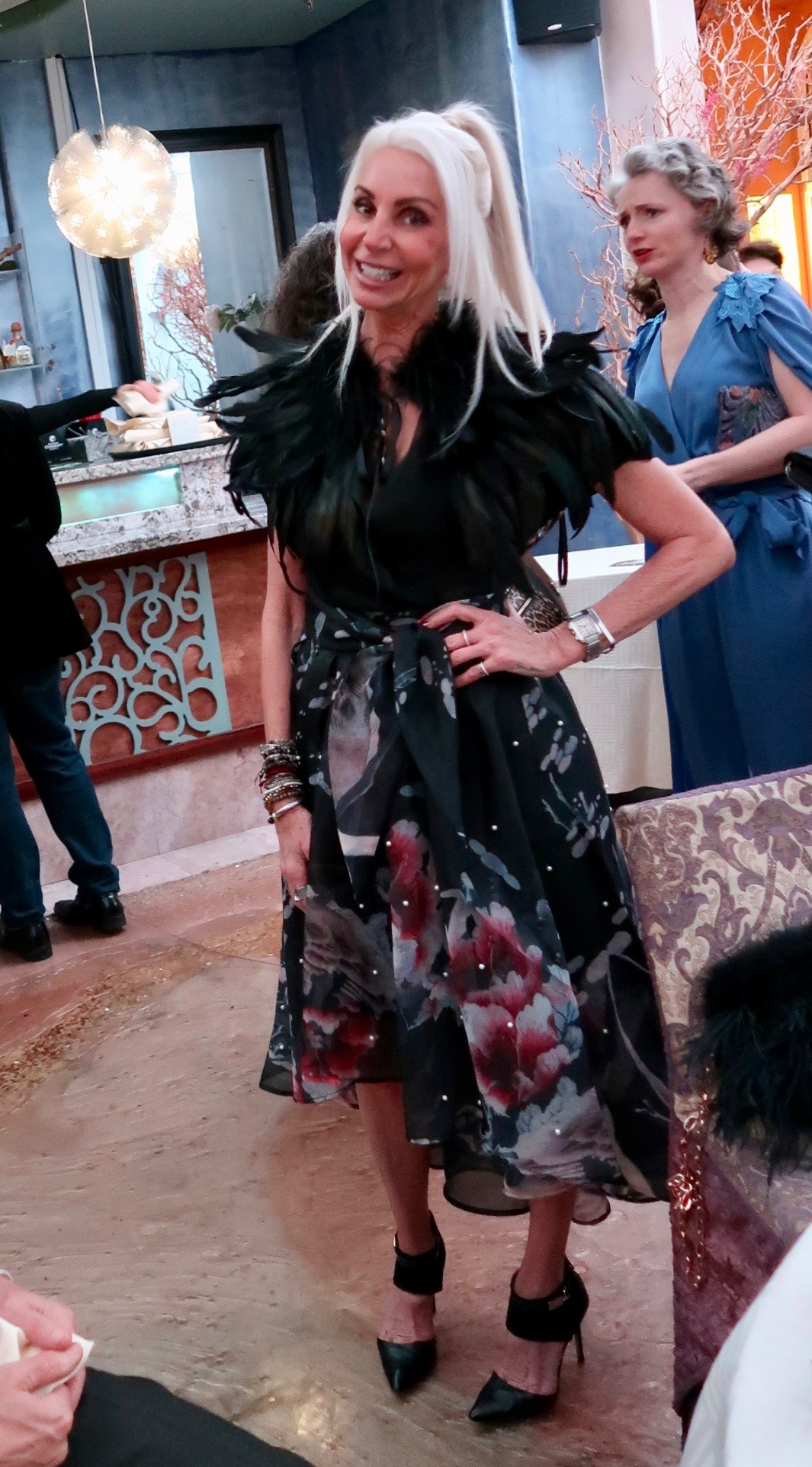 We are definitely in the midst of a cultural revolution. Ditching the dye is going to become more prevalent the more other women see how beautiful these trailblazing women look and feel. However, the revolution is not just about gray hair.  It is about the outdated societal views that women over fifty, or perhaps younger, are no longer as vital, sexy, or relevant. To use the term, it is still believed that after a certain age women are "over the hill". This is called Ageism. As I have been writing on this blog for more than 6 years, I have pointed out that women are many times more vital and creative once they no longer care what society thinks of them and when they are free to be themselves.

The film beautifully depicts not only how hard it is  to make the decision, but how hard it is to transition from dye to no dye. Every one has a story worth watching in this great film.  In the end, however, there is one thing that is universal among all of the women.  Once they have embraced their natural hair and beauty, there is a huge sense of freedom. Freedom from worrying about when to get touch ups, worrying about what society will think of them, and a host of other things

You can see below how thrilled each woman was not just to be there and hear the stories in the movie, but to meet each other. There is a great bond that occurs between women who take this similar journey together. The evening was a celebration.  A celebration among all of these women who bucked what other people think, and took a difficult journey in to the unknown. The women there were celebrating the end of the journey and how beautiful each of them feel and look for having done it. The real lesson in all of this is that women who go through this process emerging with a feeling of  freedom to be and love themselves even more. You can't write a story better than that. 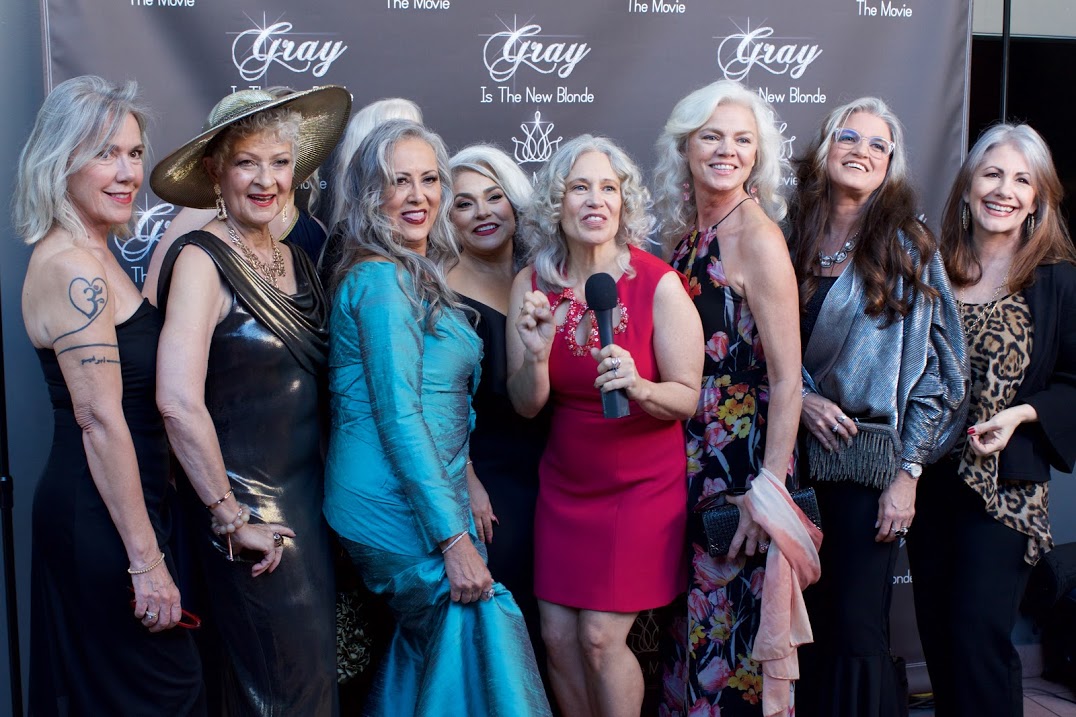 These were some of the women who you can see are just thrilled to be there not just to see the movie, but to meet each other.

The excitement was not only palpable before the movie, it was even more fun to watch these lovely ladies bond. They all had one thing in common, and the movie was soon going to acknowledge their courage, persistence and ultimate victory.