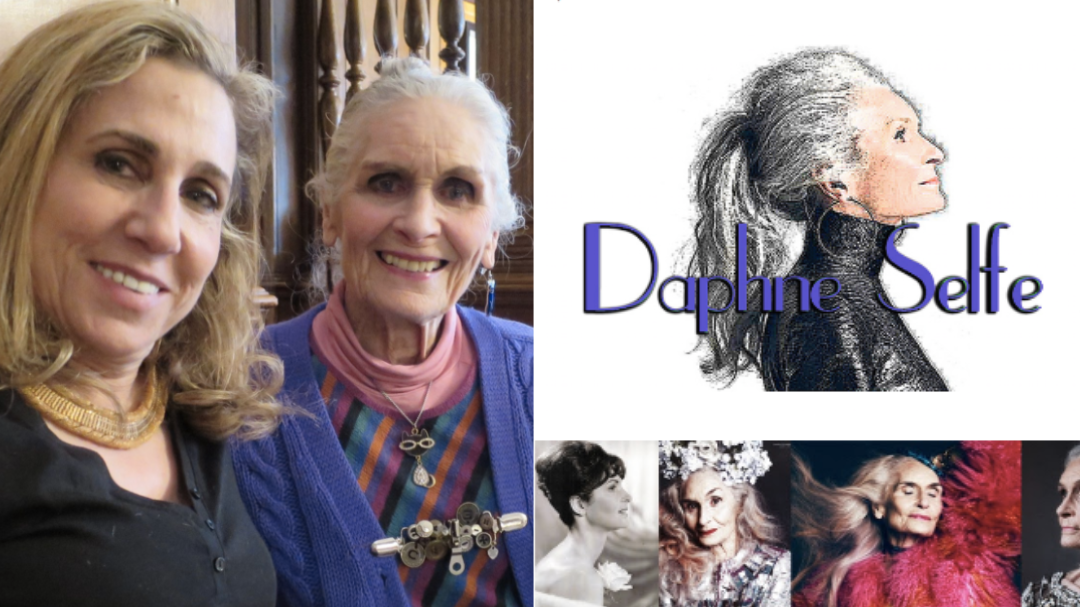 The Fashion Show/ Modeling bug definitely has hit me so much, that when I learned about Daphne Selfe's modeling Schoo, I couldn't say "NO".  After producing my third fashion show at Bloomingdale's, I have started to  to feel like a pro.  One of the wonderful Fashion Over Fifty models, Irene, and I both noticed at the same time that the iconic  model, Daphne, 87, was giving an online class on modeling, with the finale to take place in London!! So, we both jumped on it and signed up.  Irene learned so much about modeling whereas I was more interested in the back end, such as what models need to do and know.

The class was wonderful in providing information on what you need to do and what to expect in the world of fashion. Irene took the class because she wants to be, and should be, a model.  I took it because I think I might want to start my own Modeling Agency for women Over Fifty.  I got a very good idea of the inner workings of what an Agent would require from a model. When Irene and I talked about both doing the class, we looked at each other at the same time with the same idea.  The finale of the class was to take place in London at Tea with Daphne and her assistant Claire. At that moment, we both started dreaming of meeting Daphne at a Tea and having the opportunity to  converse with this National Treasure of England. Being from the United States, we don't really have models like Daphne, so we started planning our trip right then and there!! Here we are, Irene and myself, in London. We really had to pinch each other to believe we were really there. We were a long way from Bloomingdale's in Chicago!!!

The day of the High Tea arrived on a Saturday. We were told to meet at Brown's Hotel, which I had never heard of. Harrod's was about the only place I truly had heard of other than H&M and Zara, and those are all over the world. So off to the famous Brown's hotel we went. Upon arrival, we knew we were somewhere quite POSH, to use the British term. This only made us more nervous and excited.  We were like 2 little girls. We weren't sure where to wait because we got there early.  So we decided to wait in the Bar.  Even the Bar was gorgeous with mahogany wood, and elegant flowers. The tea room was exactly how I had pictured it with little table and comfortable chairs.  The ambiance was so warm, one could see themselves snuggled with their tea and scones for many hours. My mother and I loved to go to tea.  In fact when I last moved, about 20 years ago, we let the men do all the moving and we went and had tea at the Peninsula Hotel in Beverly Hills.  I am embarrassed to admit that, but we took every opportunity we could to have High Tea.  We had had High Tea in Paris at the Plaza Athene, and in Switzerland at the Beau Rivage Palace, but somehow High Tea in London was trumping all of the others.

Daphne and her lovely daughter were there and greeted us so warmly. Once we sat down, Irene and I felt so much more comfortable. Daphne was a human just like us, and her daughter could not have been any more hospitable. Irene and I were fascinated by Daphne's stories of her childhood, her children, her modeling career, and just life in general. Claire is to my right, Daphne to my left and Irene is to the left of Daphne. There we were snuggled in a little corner and enjoying every minute of learning about Dahne's and Claire's lives.

I must admit, I really missed my mom sitting there.  Maybe her spirit was in the room and I just didn't know it, but I certainly could not stop thinking about her. My mother was a true Fashionista and would have so enjoyed meeting Daphne as well. But, Claire and Daphne made me feel so comfortable, the five us had a very nice time. Here is Irene getting her Certificate for finishing the class.  Doing all of the work for the class entailed quite a bit of work. Irene had to find photographers to take her photo and fill out forms, and all kinds of other things, which I read, but I didn't do. So, no, I didn't get a Certificate.  One day, maybe I will do all of the things required but my chances of opening a Modeling Agency are probably greater than becoming a model. Although, one never knows, does one? My opinion of Daphne became more real as we sat there. Daphne is such a kind and down to earth person. Irene and I wished that we could take her home with us. My dream became one of bringing Daphne to the United States to be in a Fashion Show that I produce. Recently, this seems like it may become a possibility, which is just crazy.

So, for now, this is the end of the fairy tale that became a reality for 2 American women who really value what Daphne has done for women all over the world with her work as a model in the fashion world.  She is the oldest super model, who has had no plastic surgery or and has stayed true to herself. Thank you Daphne and Claire for an afternoon neither of us will ever forget. Let's hope we can take you to the Peninsula Hotel in Beverly Hills in the not too distant future. XOXO